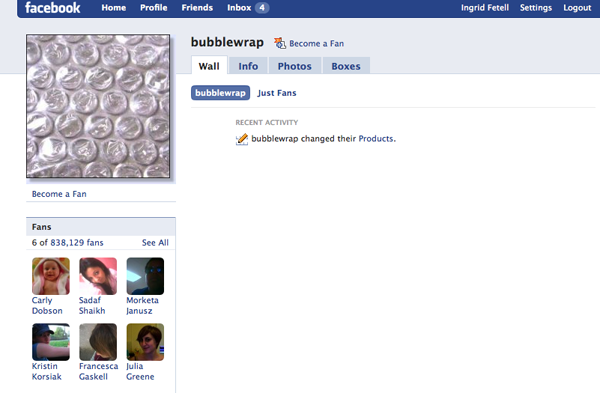 Bubblewrap is one of those odd cases of joy that has had me puzzling for a while. It has some of the superficial attributes associated with other joyful things—the transparency and roundness of bubbles, for example. But holding it against my definition of joy, (“a pleasureable transcendence of expectations”) it doesn’t seem to stand up. After you’ve experienced bubblewrap once, you know what it’s going to do; your expectations are set and there’s no real surprise there. And yet it doesn’t take away from that intensely satisfying little “pop.”

So why is the experience of bubblewrap so joyful? Part of it has to do with the unpredictability of the exact instant of the pop. In the moment of contact between thumb and bubble, you’re not aware of it, but your brain is adjusting the pressure and trying to make a prediction about exactly when that pop is going to happen. Even though you know it’s coming, it’s always a surprise on some level, in the same way as a jack-in-the-box or the big “Boo!” in a horror flick.

But I didn’t really understand why bubblewrap was so universally accepted as joyful (it has over 800,000 fans on Facebook, and someone has even developed a bubblewrap iPhone app) until I hit upon a new category of joy: transgression. Joyful transgressions are actions that violate conventions or rules in a pleasurable way, without harmful side effects. So, for example, eating dessert before dinner is a harmless, pleasurable transgression, and has a joyful quality to it, while stealing a candy bar from a convenience store might be pleasurable, but is not joyful because someone else is harmed in the process.

Popping bubblewrap plays into this idea of joyful transgression in two ways. First, it’s destructive, because bubble wrap is only functional while intact, but it’s a harmless destruction because the consequences are so trivial. And second, it’s noisy, so each loud burst makes public the destructive act. In this way, there’s something comically illicit about popping bubblewrap, and therefore joyful.

I’m curious what a bubblewrap manufacturer would think of all this, and how demand for the product is evolving given the newer, more environmentally gentle solutions, and I think I’m going to seek one out for a short interview. I’m sure all this talk has made you want to find some bubblewrap to pop, so good luck raiding the neighbors’ discarded packages. In the meantime, content yourself with a marginally satisfying online version.