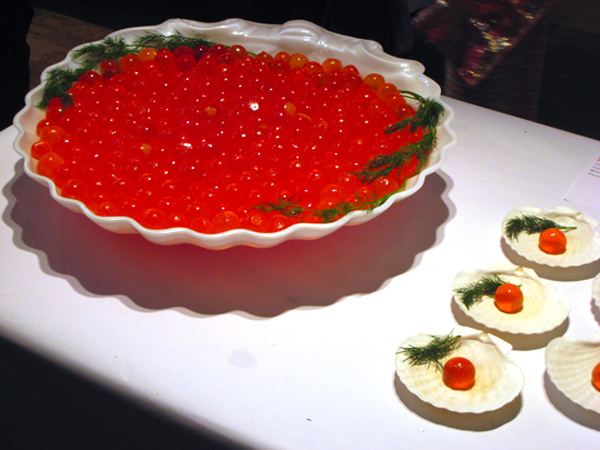 Jell-O is an absurd food, and there is often something joyful about things that are a little bit absurd (to wit: flamingos, hula hooping, and those wonderful Wayne Thiebaud cake paintings). Everything about Jell-O is somewhat ridiculous — the name, for starters; the color, because no real food is ever that neon; the dancing wiggliness of it, its preposterous, inelegant, delightfully unpredictable movements.

So it should be no surprise that people are drawn to doing absurd things with it. The Gowanus Studio Space‘s Jell-O mold competition, held last weekend, challenged designers to work with the medium in a novel and engaging way. As a designer I was most impressed by the guy who roto-molded Jell-O spheres, which I think hold lots of joyful potential to be filled in surprising ways. But I was also taken with this Jell-O caviar, shown above, which apparently had a fishy taste to it (gross!). You can see these and more in this excellent video.