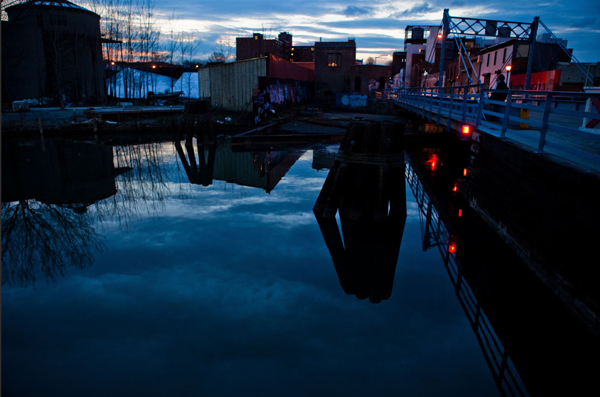 I have a post in draft form (that I hope, eventually, will see the light of day) about universal vs. individual aesthetics of joy. Of course everyone has different things that bring them joy, but they don’t necessarily conform to what would be defined culturally as joyful aesthetics.

My project generally focuses on the more general, more universal aesthetic patterns because it makes it easier to draw lessons that can be applied broadly to design. But occasionally I come across what I would call a “counter-aesthetic” of joy: an object or space that on the surface looks to be the very opposite of joy, yet someone has managed to wring delight from it.

The trigger nearly always has to do with personal experience, as is the case here, with these photographs of the Gowanus Canal by José Gaytan. Gaytan, a Brooklynite who grew up in Juarez, Mexico, was attracted to the canal by a familiar smell. “That aroma is embedded in my brain,” he says, “a mix of sewage, kerosene and oil.” Which doesn’t sound so appealing, except that it reminds Gaytan of his handyman grandfather, and the junkyards he used to play in while he was alongside him on jobs.

This illuminates one of the true marvels of emotions in the brain. Aromas, colors, textures, sounds — all of these things can become associated with positive or negative feelings through experience and memory. Especially aroma. Current research suggests that smell is processed differently in the brain from the other senses, and may therefore have a stronger link to long-term emotional memories. So a smell (stench?) that for most of us might connote filth in need of a Superfund cleanup, for someone else evokes the joy of childhood.

Where this gets interesting is art. To feel joy where others don’t is wonderful, yet limited. But to try to shine a light on your joy and share it with the world, especially when it involves overcoming preconceived notions, is a powerfully transformative act and deserves a place in the schema of aesthetics of joy. A success in this regard is to make us see a place with fresh eyes. As Barbara Wing, curator of the Brooklyn Public Library’s exhibit of Gaytan’s photographs, says, “He really looks at details we don’t notice. The colors are fantastic, almost painterly.” Just as long as they don’t come with the smells. . .

Thanks for the tip, Dad!