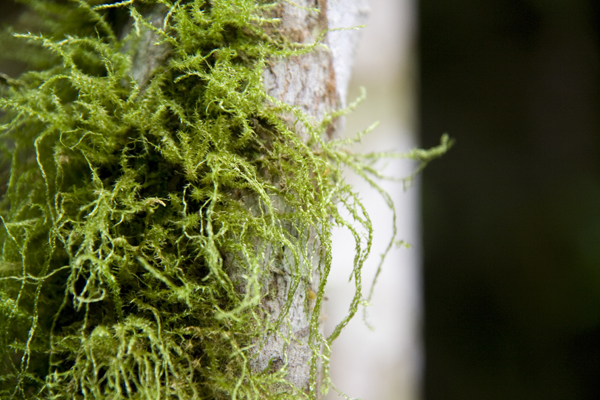 I guess moss isn’t the most obviously joyful plant. It doesn’t have brightly colored, showy flowers. It doesn’t have alluring scents. You can climb it, swing from its branches or play hide-and-seek behind its trunk.

But what moss lacks in all these ways, it makes up for in the pure delight of abundant texture. Moss is one of my fingertips’ absolute favorite things to touch. Like the scene in Amélie where she plunges her hands into a sack of dried beans just to revel in the sensation, my senses derive pure joy from the soft, cushiony texture of healthy moss.

This moss appeared on the last day of the trip. It’s the dry season, and most of the Galapagos landscape is desertlike, with spindly trees, spiky cacti, and a ground cover of greyish succulents. But on the last day we headed to the highlands to seek out some tortoises, and the lush, jungle-like environment was a delight after so much dryness. Rich, tactile mosses were everywhere, but of course when traveling in a foreign place the rule is look but don’t touch, and I had to be content with just a photo.