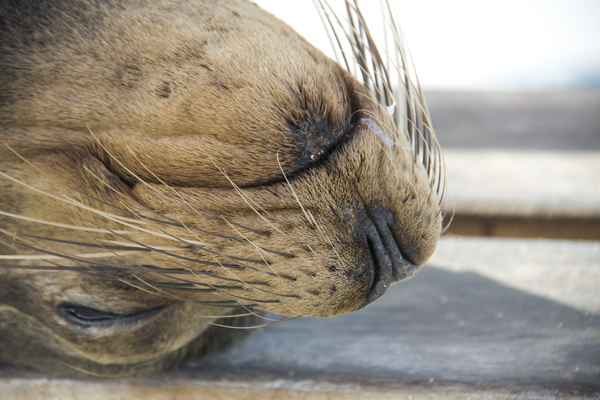 Well, I’m back! And as hard as it was to say goodbye to my family and those magical, remote islands, I must say I did feel a rush of joy walking into my apartment late last night. I was exhausted from dawn-to-midnight travel, but it sure felt good to be home.

The Galapagos are everything people say and more. Their relative isolation for thousands of years means that you can observe at very close range all kinds of animals that anywhere else would flee in fear. It’s a little like scuba diving, that way, and it creates opportunities for all sorts of joyful encounters.

Take these sea lions, for example — our welcoming crew at the port on Baltra island. Most animals used to human presence become opportunistic; trained by handouts of food intentional or accidental, they are reduced to beggars. But the Galapagos sea lions greeted us with a disinterested sigh and the occasional snort. Napping on the benches and the steps of the pier, they made evident that this was their home and that we were free to come and go as we pleased but they were not going to trouble themselves about it one way or another. They let us get so close to them, closer even than one could get in a zoo, and with that physical proximity came a sense of almost spiritual closeness, because there was mutual trust and respect, so rare among man and wild animals. 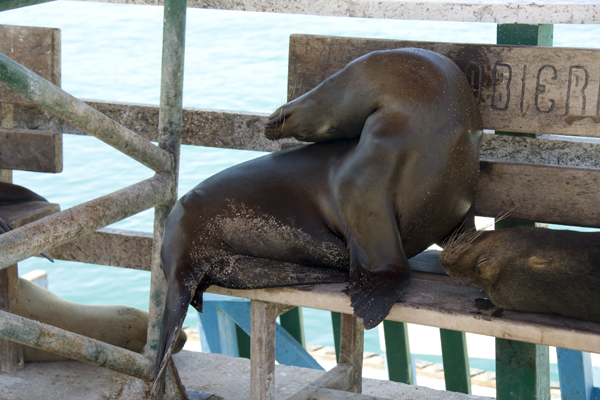 The sea lions are the hedonists of the Galapagos, lolling around in the sand, napping for hours on sun-baked rocks, their eyes nearly always drowsily half-open. They cuddle, these sea lions, in twos or threes or eights or tens, their smooth fat bodies massed together, an occasional fin draped over one’s neighbor. You see so many sleeping sea lions in the Galapagos, you might wonder if they ever do anything else. But then you see them in the water, utterly transformed.

As indolent and awkward as they are on land, they are exuberant and agile in the sea. I was lucky enough to get to play with one while snorkeling, entirely on her terms, which left me equal parts terrified and delighted. The game she plays is this: she swims full speed from ten or so yards away, her snout aimed straight at my mask, looking with full determination like she’s headed for a collision. At the last second, she ducks under me, turning, swimming away for half a minute or so, leaving me a few breathless moments to get ready for the next round.

Over and over this happened, and I felt what I have so often tried to describe on this site — the repeatable rush of true joy. Each pass the sea lion made gave the same rush of delight, over and over again, and I know that were I to zip on a wetsuit and get back in the water tomorrow or twenty years from now, I would still feel that same wonderful feeling.

More photos and stories to come. I took over 500 pictures, so I have a lot of work to do before I put them up! Stay tuned….