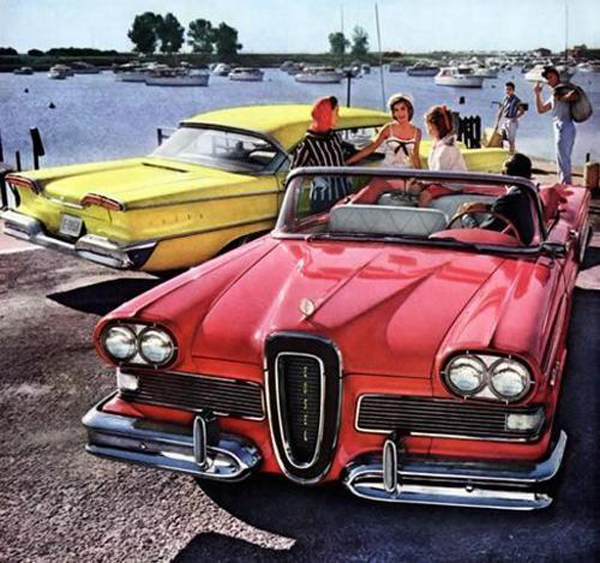 I would like to drive around in a car called the “Utopian Turtletop,” wouldn’t you?

That was just one of many names that emerged from a brief but joyful collaboration between the writer Marianne Moore and the Ford Motor Company in 1955. Ford approached Moore for help with naming “a rather important new series of cars” and though the names she suggested were all passed over, they still delight. Wouldn’t a “Pastelogram” be nicer to drive than a Focus? Doesn’t a “Fabergé” sound cushier than a Fusion? Ok, to be fair, perhaps the delicacy implied by that last one  doesn’t bolster the crash test rating claims, but surely all of them are better than “Edsel,” the name eventually chosen by the Ford execs.

I love the idea that poetry can lend levity to product naming. Naming in the automotive industry has become beyond bland. In the past few years or so we’ve moved away from the dull, corporate neologisms like Altima and Innova towards peppy party words like Jazz, Beat, and Fiesta that are just begging for exclamation points. They might be more upbeat, but they’re still pretty mundane. Collaboration with people who are used to using language in more joyful and flexible ways would take product manufacturers out of their comfort zone — and that could be a wonderful thing.