An email from a reader got me thinking again about joyful behavior. I’ve written before about joyful behavior in the form of random acts of kindness and other unexpected actions. These are often 1-to-1 or 1-to-many exchanges, and done with a certain level of intention.

Flash mobs are another form of joyful behavior, but rather than focusing on making one or a few people feel good, they’re focused on collective enjoyment at a large scale. For those who haven’t encountered this phenomenon, a flash mob is a public spectacle usually organized by email, Facebook, Twitter, text, and other social networking technologies and services. Flash mobs gather groups of random people to do unusual things, such as ride the subway with no pants on, host a subway station art gallery, have a pillow fight, blow bubbles, or do a huge coordinated dance routine. This phenomenon has become so popular that you can find more than a couple MJ-themed flash mobs with little effort, and lots of events that require at least a marginal suppression of dignity.

It may not always be in good taste, but it’s usually in good humor, and good fun if you’ve ever experienced one. My dad and I walked through Times Square during this year’s Bubble Battle, and felt first hand the joy of a place we know well entirely transformed by the odd, but welcome spectacle. Flash mobs are also a wonderful way to experience the contagiousness of joy in action. Watching the videos you first notice a few bewildered looks from the immediate passersby, followed by smiles and whispers to companions. Others, who may not have noticed the spectacle, see the reactions of those around them and snap to attention, and you can watch as the processing happens in their brains, and the smiles spread across their faces too. Like a water ripple, joy spreads outward in concentric waves. Confusion turns to delight, and then comes back in on itself, as people converge to get a closer look. Then cameras emerge and text messages are sent, propelling the ripple even wider.

When people talk about the rise of flash mobs, they always talk about social media. But social media are only the enabler; what interests me is the drive. Media are the how, not the why, and the why is an infinitely more interesting question. I believe the rise of these events is driven by a craving for joy in everyday life, a desire to let the inner child out to play in a way that feels free. It’s a drive for connection, for tactile experiences, for oddity among the homogenized landscape, for reprieve not just from recession but from all of the rigidities and pressures of adult life. It’s a desire to participate in something where the outcome is uncertain and unimportant, because the experience is about being in the moment. And it’s not just about being in moments, but about creating moments that are worth being in, more worth being in than moments spent in front of the TV or swiping your card at a cash register. It attracts people of all ages and lifestyles because this is a deeply human need.

It is a wonder when technology provides opportunities for the new satisfaction of emotional needs; but because emotional needs can be repressed, rechanneled, and hidden for long periods of time, their sudden satisfaction can make it look like they are new needs, rather than long-buried ones. Flash mobs, in their  absurd way, make us conscious of this latent craving for serendipity in our culture and ourselves. 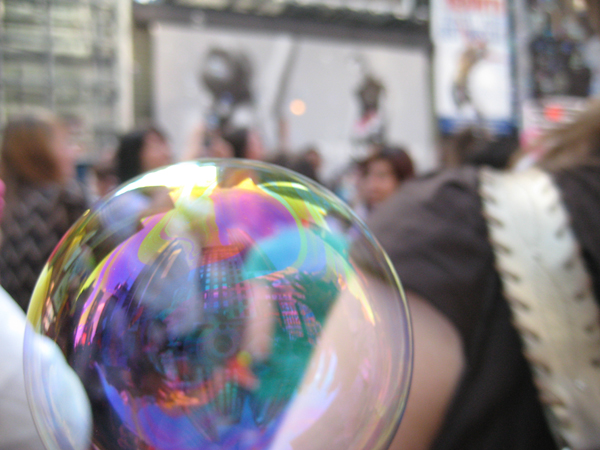