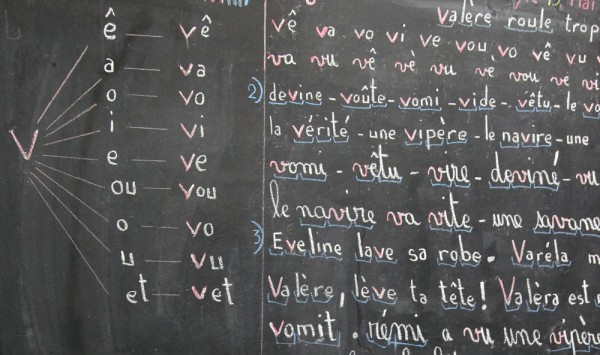 That was my friend Peter’s reaction to evolutionary biologist Olivia Judson’s NYT blog post this week, which discussed the connection between making certain sounds (such as “eeee”) and positive emotion, via what’s called the facial feedback hypothesis. Judson explains the link and then goes on to wonder: Do certain languages with “smiling sounds” make their speakers feel happier than others? Are some languages, by a curious accident of circumstances, languages of happiness?

Peter’s reaction was mine as well, because we had just had this exact conversation a few weeks ago. I was expressing my frustration in being unable to find a linguist who could illuminate the connection between language and the facial feedback hypothesis. I had done this post on words that make you joyful early on in the blog’s history, and drawing on Eric Weiner’s “Mol-do-va” (dour) vs. “Ja-mai-ca” (euphoric) comparison I was sure there had to be research on the subject. Peter then told me he had formulated this hypothesis 35 years ago, and had long believed in the power of onomatopoeic words like “glee” to boost your mood.

According to Judson, no research has really been done to confirm or refute these suppositions. But, going on what we do know we can deduce a premise that intuitively feels plausible. If induced smiles have been shown to impact mood (as they have in several studies, most notably this one), and certain sounds induce smiles, then it seems likely that these sounds could influence mood, and by extension, so could the languages that make frequent use of them.

If, through research, we discover this is true, then it adds in an exciting way to the pool of sounds that can be considered intrinsic aesthetics of joy. We already accept the emotional content of musical sounds — that a bright, brassy note from a trumpet is joyous while a drawn-out note on a cello is baleful and contemplative. And certain voices affect us similarly — the high pitch of a child’s voice triggering a different emotional response than the husky bass of an old man. With linguistic sounds, the question is slightly different because it is not about the sound itself, but the motions required to produce the sound — the accident of nature that conflated smiling and speaking functions into the same muscles.

This leads to another interesting question: do you have to actually make the “eeee” sound, or is just hearing it or seeing it pronounced enough? For true facial feedback, you’d actually need to perform the gesture. But I wonder if seeing the action might trigger another brain mechanism — mirror neurons — that might augment the effect of a “happiness language” through social interaction. Mirror neurons are a relatively recent (and extremely exciting) discovery in neuroscience. They fire not just when we perform an action, but also when we see or hear the action being performed by another. Supposedly, these neurons help us learn something new through imitation, whether its a language, an instrument, or another skill. If this is true, then perhaps just sitting across the table from a person making “eeee” sounds over brunch could give your mood a boost, and a “happiness language” could have a contagious quality, infecting people with positivity even during mundane interactions.

What does this have to do with design? Perhaps we could design a language for happiness. I’m not talking about the next Esperanto, but what about a new slang that replaces a few of the most frequently used words with eeee-heavy alternatives? We could adopt the Spanish “sí” for yes, but draw out the vowel so it becomes “seee” and choose another eeee word for no. Start pronouncing “the” as “thee,” as in “theeee end.” Push, pull, stop, go, walk, don’t walk — the verbs of urban living might all have smiling correlates.

What else could design do with smiling sounds? Redesign positive affirmations to use smile-inducing words, so that the act of speaking them reinforces the message. Change the yoga chant from “om” to “eeem.” Use smiling sounds in the naming of new products so that saying the name intrinsically creates a positive connection. Create linguistic-based facial exercises for sufferers of depression. Incorporate verbal keywords into the computing experience, all based around smiling sounds, so that instead of feeling frustration at our computers, we feel…a little less frustration. Design verbally activated switches for the home that react to “eeee” sounds — a happier “Clapper.” These are just top-of-mind thoughts, but the possibilities are intriguing. They may sound silly, but that could just be the point. At least, if you pronounce it “silleeee.”