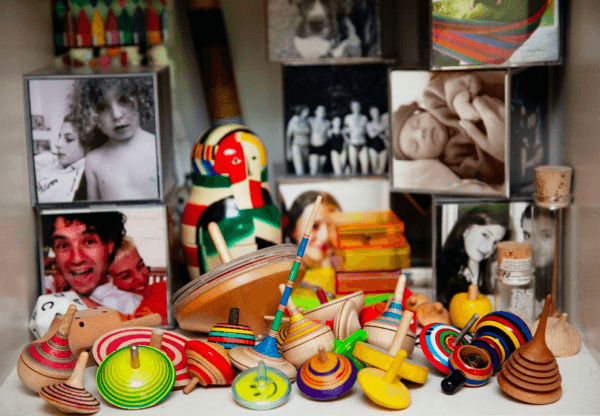 Rob Walker (of Consumed) had an interesting post on his blog recently evolving the discussion around my Psychology Today post about Unhappy Hipsters and the emotional tenor of modern design. He picks up on my assertion that delight is at root an emotion connected with abundance. In my post, I wrote:

I think that modernism’s restrained quality is fundamentally in tension with the idea of delight. Delight is an emotion of abundance — a celebration of sensation and richness. Delight and joy are primally connected to wellness, and wellness in nature is lush, plump, vibrant, and bountiful.

Walker observes that there’s often something enchanting about abundance in the context of interior design, such as in many of the homes featured in “Sneak Peeks” on the blog Design*Sponge. (The photo above is from a similar type of series: The Selby‘s photos of the homes of creative people. This one is from the home of Sydney gallerist Sarah Cottier, photographer Ashley Barber, and their daughter Ruby.) We value a little abundance in the form of creative clutter because it makes a space invitingly human; collections of real things arranged at non-90 degree angles tell us we’re in a home, rather than a sanitized photo studio or furniture showroom. At the same time, Walker voices a healthy skepticism about the joys of abundance:

I am somewhat cautious about that connection between delight and abundance. Buying into that idea full-on would be emotionally catastrophic — I mean, maybe those “hipsters” are unhappy, but watch an episode of Hoarders and decide for yourself how delightful that abundance seems.

This contrast — between joyful collecting and anxious hoarding — raises some big questions that push the discussion on abundance into an important area. It’s clear there’s a line where things go from joyful plenty to horrifying excess. But where is that line? And why do many of us seem to have so much trouble staying on the healthy side of it?

A clue to our precarious relationship with abundance lies within our own brains, and the neural wiring that underpins our emotional responses. Many emotional reactions are triggered unconsciously by aesthetic (or sensory) elements. Aesthetic elements can take on different meanings through cultural encoding and personal experience, but underneath these layers there is often a kernel of biological inclination, shaped by evolution. One example, which I alluded to in my PT post, is people’s general preference for curves. A primal, unconscious part of our brain (the amygdala) has an intrinsic, background-level fear response to sharp corners, a reaction that makes sense. This emotional response raises our alertness around potentially harmful objects, and by consequence, our chances of survival. The response is purported to have developed over the more than 80,000 generations of the Pleistocene era when humans were evolving into their present form, and were surrounded by an environment where the angular things they might have encountered included cliff edges, tree branches, and predators’ claws — all things around which it’s unwise to be too cavalier.

I believe there’s a similar evolutionary principle going on with abundance, a hardwired predilection etched deep into our brains. My view is that a preference for abundance is a natural residue of generations of evolution in an environment where “too much of a good thing” conferred greater chances of survival. This is why we pig out beyond satiation at buffets and why candy stores make us feel like kids — because these things are aesthetic signifiers of a secure resource stream, something we are predisposed to celebrate and revel in.

At the same time, what was adaptive in the Pleistocene can be maladaptive in the post-industrial age, especially when taken to extremes. For most of us living in the first world, the unpredictable cycles of plenty and privation have been leveled out to such an extent that our greatest want is a lack of ripe mangoes in January. Abundance runs amok; it clogs our arteries and our atmosphere and it accumulates not just in the homes of hoarders, but throughout our environment. It hogs resources, giving some people unimaginable riches while consigning many more to persistent scarcity. This state of affairs is clearly not joyful; it’s rife with guilt, anxiety, and shame. When the population of humans was small relative to the available resources, and resources came and went in uncertain cycles, an insatiable craving for abundance made sense; now, this proclivity can be a truly destructive influence.

But our genes don’t know this. So the hardwired emotional responses that once worked so well to enhance our well-being and survival are now sometimes odds with the same ends. We stuff ourselves, shop-till-we-drop, and hoard because on some level it feels good, even if consciously we know it’s not good for us. Fortunately, we are not slaves to our genetic predispositions. While their influence over our behavior can be profound, it is modulated and controlled by a frontal cortex capable of understanding the dilemmas we face and making necessary tradeoffs. One way we do this is by exercising control over our actions, turning down a second helping or politely declining a tempting sales pitch. Another way is through the design of our environment, and this is where I think an aesthetics of abundance could be quite powerful. Can we design a feeling of abundance without the actual abundance, i.e. without having to use a lot of material, or hoard a whole ton of stuff?

What follows are a few early observations on the idea of aesthetics of abundance, along with some examples. Celebrations such as festivals are a big inspiration in this area, because they often feature abundant, yet temporary, displays, meaning they often need to feel big but be small enough to pack away later. Balloons are often used to create a sense of abundance, even though the actual material they consume is comparatively small. Confetti (though problematic in the cleanup), is another example of a product that creates a sense of abundance with little material. Surface treatments, such as patterns, can also create a feeling of abundance, particularly stripes and polka dots. I love how these stripes on the side of the Barcelona Flower Market seem to swell and move, suggesting the bounty inside: 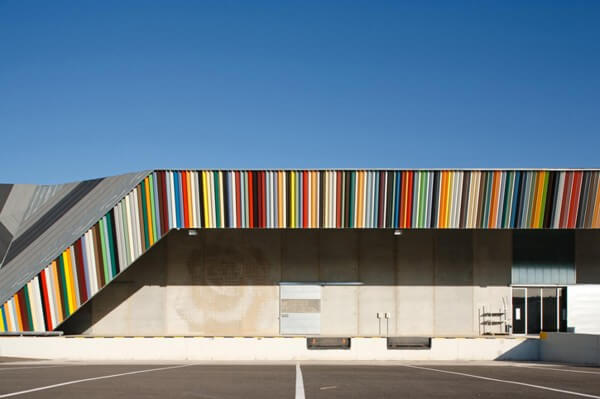 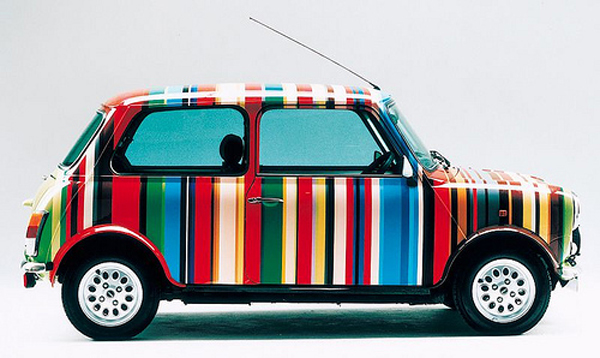 Another example — these polka dots from the Trash: Any Color You Like project take a feature of city life that normally fades into the background and makes it feel more abundant (an effective way to get people to reflect on the consequences of abundance!). 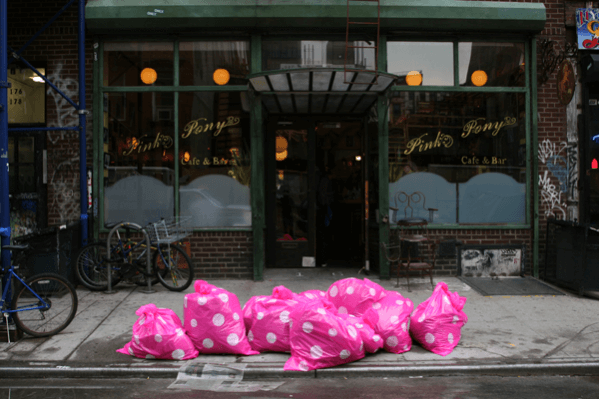 Variegated color and texture treatments also work to create abundance. Because of the rainbow hues, these chopsticks feel like “more” than they would if they were all one color. 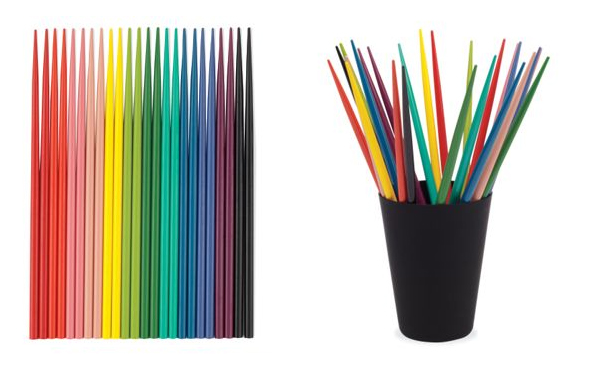 A feeling of abundance can also be created with form and texture, such as with the ruffles that are in shop windows across the country right now for spring. 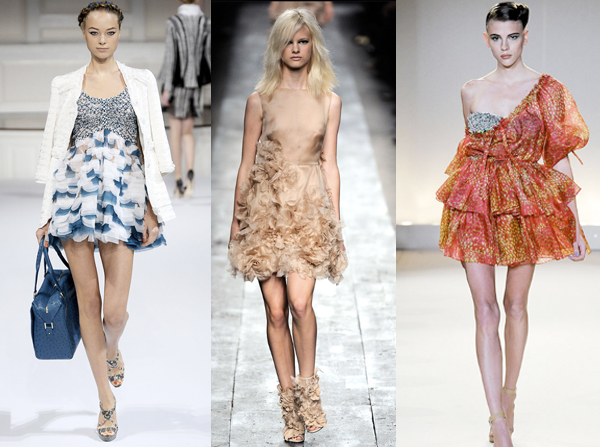 Abundance is not just about form, but also about context. A teaspoon of sprinkles feels abundant on an ice cream cone; in a giant field, the same teaspoon is insignificant. The cornucopia symbol is apt — abundance needs something to spill out from, a container to press against. It’s easier to make a small home feel abundant than a big one, which is a counterintuitive principle of some comfort to us small-apartment city dwellers. By designing small frames, we can make the things inside feel more bountiful. There’s also a role for design in illustrating the line between abundance and pure excess. That’s part of why the Design*Sponge “Sneak Peeks” are so satisfying. They show managed clutter, abundance in balance. Like a healthy psyche, they are full of emotional experiences, memories, and desires, arranged with some acknowledgment of a rational super-structure. Effusive, but not chaotic.

Like anything taken to extreme, abundance ceases to be joyful once it crosses a certain line. Science doesn’t offer much insight as to where the line is; we just know it when we see it. Love in excess becomes infatuation. Self-confidence becomes narcissism. Neatness becomes compulsion. Too much of any good thing is no good at all. The overstuffed houses of hoarders and the ultra-minimal, bare bones interiors featured in design magazines are two ends of a spectrum of beliefs about homes and happiness. I could just as easily take on the hoarders as the zen-modernists, except for one thing — no one is advocating the hoarder lifestyle. Even the hoarders view their condition with shame. Minimalism, on the other hand, is often preached as a lifestyle nirvana — a blissful, transcendent state achieved by letting go of material things. For some people, this kind of muted emotional landscape is a relief, a break from a high-stress job, information overload, or a plethora of buzzing devices. But for most of us, I’d contend that this kind of environment runs against our emotional nature. We’re made to feel joy in an abundance of color, texture, and sensory stimulation; it’s what makes the neurons fire and the brain grow and develop. Rather than fight it, I’d love to see us use design to create a more sustainable kind of abundance, one that gives us delight without compromising the joy of generations to come.