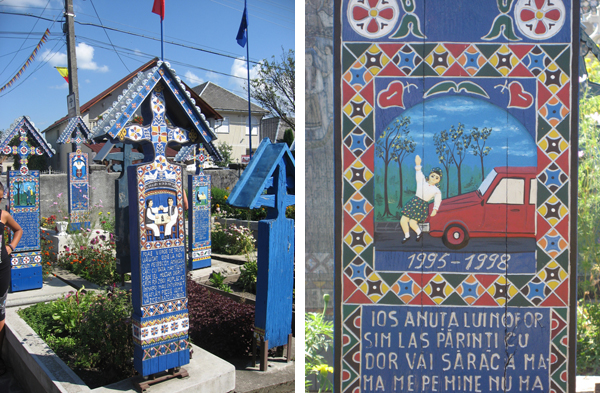 Can death be joyful?

The Merry Cemetery is a real burial site in Romania. But instead of the traditional somber aesthetics of death, the headstones feature colorful designs and scenes that explain how a person died. Some of those scenes are not too joyful (see: “Three Year-old Hit by Car,” above) but they do wrap the experience of death in a more uplifting aesthetic package. It may not make you feel any better about the loss of a loved one, but I wonder if it does change your immediate mindset on entering a cemetery. It sets a lighthearted tone that might remind a visitor that life is fleeting, and to spend the visit remembering the joys of being with the deceased, rather than the pain of being without them.

These somewhat gaudy headstones remind me of a procession that went by on the day we buried my grandmother. We were driving back from the burial, and at that moment a hearse drove up with an enormous picture of a deceased woman on top, ringed with many garlands of flowers. It was so visually loud I had a moment of synaesthesia: I could practically hear a marching band accompaniment to the parade-float aesthetics of the hearse. It was a jarring contrast with the understated, Bach sonata aesthetic of the funeral we had just attended, and my cousin couldn’t help but say, “That is so not Nana!” It was true, and we burst out laughing. Nana was reserved, self-effacing, elegant, in life and in death.

But to each his own. Apart from a merry cemetery or a joyful hearse, have you come across other ways people create a joyful celebration of a person’s life, after death? Do you know of any other joyful funeral rituals, either personal or cultural? 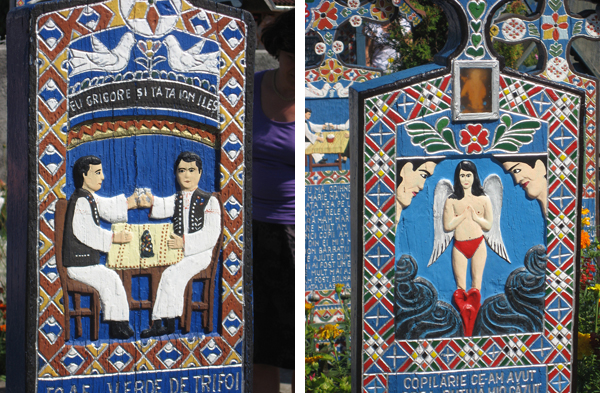