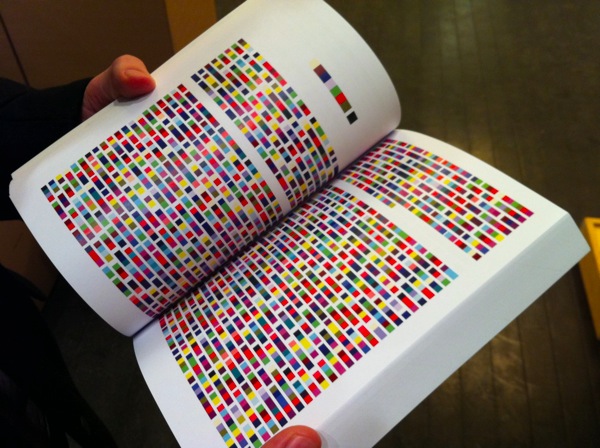 This book, by artist Kyo Myoung Kim, fascinates me. Spotted at an exhibit at the Cabinet space in Gowanus, Brooklyn a couple of months ago, the book has been lodged in my mind ever since. I can’t stop thinking about what it would be like to write this way, to communicate with a color language. Would you type it on a rainbow keyboard? Or compose on a color wheel? What kind of pen would you have to design to produce these signs?

Imagine the experience of creating this book, translating it from words into reds, violets, and oranges. What would it be like to be drilled as a child on a chromatic alphabet? To unlock meaning effortlessly from this linguistic confetti?

Hue, saturation, value: What roles would these play? I can’t help but push this further. Pure hues might be phonemes, and the lengths of the bars might indicate inflection. Value might be volume. Saturation might be emotional tenor. Can you imagine the beauty and the power of a language like this? I was reading this week about how phonetic languages (most Western languages), as opposed to pictographical languages (Chinese, Japanese, etc.), offer the flexibility to be able to write in dialect. I never thought about this before, but because all we’re doing in writing English is transliterating sounds, we can change these sounds around to suggest a drawl or foreign intonation. A language like this color language I’m suggesting, though it would be nearly impossible to master, would allow new layers of meaning and direction to rise from the page. Think how crude our written tools of emotional expression – the all caps, the exclamation point – seem, against the possibility that words themselves could be colored based on emotion and volume. In a novel, you could see an argument set in dark, deeply saturated bars. A mumbler would speak in strands of near-grays. A languid, happy character would shine through long bars of bright pastels. A new richness of plot and character would be available to writers and readers.

A reader would not actually need to understand the language to feel some of the meaning. Like spoken language, where we understand much from inflection, even in languages we’ve never heard before. One could flip through a book in this color language and feel the arc of the story, understanding the emotional narrative if not the descriptive one.

This language also would mean the same speech might look different when uttered by a different speaker. I’m imagining a poem written in this language, transcribed as read by three different readers. How different these would look, but still comparable, because all the hues would be the same. Or imagine a small book, with a series of poems as read by two readers, the two variations facing each other across the pages. (A project for a rainy day.)

I suspect there might be two unexpected discoveries in this exercise. One, that the immediacy of color might change the meanings of words. Some words might be unexpectedly beautiful, others jarring, depending on the new system. A kind of synaesthetic onomatopoeia might emerge. And secondly, that folding emotion into language might create a different kind of awareness of emotional content in dialogue. If we had to encode what we’re feeling in language, how would this articulation affect us? And if our emotion were indicated in our writing, how might our relationships change? Would we feel closer to each other, or would new misunderstandings arise? Would color language be a truer reflection of our minds? Or just a richer one, without any bias towards precision or accuracy?

Correction: The name of the artist of this piece should have read Hyo Myoung Kim. Apologies for the error. You can find more of Hyo Myoung’s work here.