As a color-lover, I’ve often wondered what it would be like to be colorblind. What would I miss, beyond the boundaries of my own visible spectrum? Would I understand the lack intuitively, or only by comparison with others?

The short film above, “Ishihara” by Yoav Brill, offers an emotional peek into the world of someone with severe color blindness. In the film, Brill cleverly co-opts the visual language of the Ishihara test, a series of dotted color plates used to determine whether someone has problems with their color vision. I’ve always found the Ishihara test to be joyful-looking, like clusters of colored bubbles, though bittersweet that something so beautiful could be the confirmation of bad news for someone. And I imagine it must be frustrating to know that there’s information hidden in the pattern, and yet be completely unable to detect it. (If you are color normal, you will see the numbers 6, 12, 2, and 42 in the charts below.) 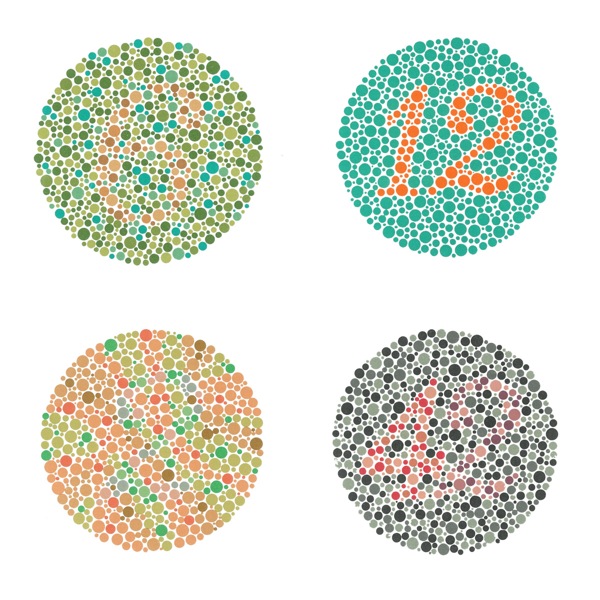 On the other hand, when I listened to this episode of Radiolab, I realized that lots of animals have better color vision than we do. Birds have one extra type of cone cell in their eyes, opening up a world of different colors than we have. And if that sounds amazing, think of butterflies, some types of which have seven cones, or the mantis shrimp, the organism with the world’s most complex eye, which has sixteen cone cells! Those guys must have a technicolor life!

All of which is to say that the colors that exist in the world are far more numerous than we can perceive, whether we are color blind or color normal. Maybe one day scientists will figure out a way to let us see what birds see. But more significantly, just recently scientists have figured out a way to help color blind people see more normally.

Neuroscientist Mark Changizi (whose work I first wrote about here) has written extensively on the evolutionary history of vision, and why everything from our depth perception to our written language evolved the way it did. His work on color vision is particularly interesting. He has put forth an alternative (or perhaps complementary) theory to the idea that human red-green color vision evolved to help us find nourishment, instead proposing that we evolved the ability to see color to understand the health and emotions of the people around us. Based on that work, a few years ago Changizi co-founded a company called 2AI Labs and started development of a set of glasses called O2Amps designed to amplify the visibility of blood oxygenation and other factors that help make these physical and emotional states more apparent.

Hospitals are using the glasses to help with diagnoses — they can make bruising under the skin from trauma and other disorders more obvious — and to help nurses find a patient’s vein. Another potential application is for security officers such as the TSA; the glasses may help officers better identify people in an agitated state. Once the glasses were released, though, Changizi and his collaborators began hearing from color blind people who had put them on and experienced the world in an entirely new way.

Here’s a quote from Dan Bor, a red-green color blind neuroscientist who tested the glasses:

I’ve just received a couple of special specs to attempt to reduce my colour blindness, from Mark Changizi and O2Amp. When I first put one of them on [the Oxy-Iso,], I got a shiver of excitement at how vibrant and red lips, clothes and other objects around me seemed. I’ve just done a quick 8 plate Ishihara colour blindness test. I scored 0/8 without the specs (so obviously colour blind), but 8/8 with them on (normal colour vision)! I’m pretty thrilled and can’t wait to explore more of the world with the specs over the next few days.

The glasses aren’t without some issues — while red-green perception improves, other areas of color vision suffer. Bor observes that while red and blue were far more clear and intense while wearing the glasses (and I love that he says that lips looked red like he’d never seen them before), some shades of yellow seemed to disappear, and Changizi cautions that the glasses shouldn’t be worn while driving, as the yellow light in a traffic signal could become invisible. As magical as it seems to give color to the color blind, it’s not a pure gain, as the enhancement in one part of the spectrum comes by “spreading out” the loss across other regions. Still, Bor notes that it’s amazing to be able to have a sense of what someone who is color normal might see, and even better to have the choice. (He says he’d bring the glasses to an art gallery, but probably wouldn’t wear them every day.)

When I see anything, art or science, that can expand the boundaries of our world and give more vibrancy to it, I feel such a sense of awe. It’s like joy is hiding in front of us, sometimes in plain sight. And then one day someone just comes along and reveals it. A pretty wonderful world we live in, don’t you think?

Sources: Changizi blog and Scientific American
Images: Ishihara plates no. 1, 13, 19, and 23 from Wikipedia