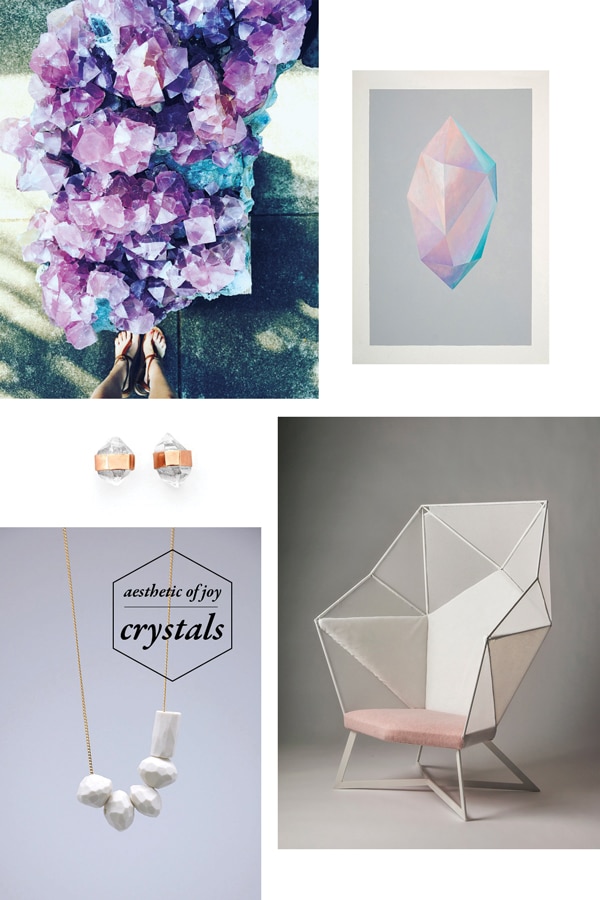 For as long as I can remember, my favorite room in the Museum of Natural History has been the Hall of Gems. Not the great hall of dinosaur skeletons, imposing and airy, the favorite zone of most children. Not the dioramas either, with their vibrantly painted landscapes, nor the vast tranquil coolness of the Hall of Ocean Life. But the comparatively inert gallery of rocks and minerals.

The hall is dark, quiet. In my memory it is lined with black velvet, though in reality it’s more like a charcoal grey carpet. The softness and muted sounds contrast with the stones themselves, the meteorites, moon rocks, and micas with their impenetrable surfaces and sharp edges. It was the crystals in particular that enchanted. Each one placed just so, each one lit to highlight its unique properties: sparkly, iridescent, glassy, swirly, faceted, fluorescent.

It’s been years since my last visit, but even in looking at the pictures, I feel a buoyant, almost giddy sense of delight. I’ve often wondered why crystals seem to evoke such passion. There are metaphysical explanations to be sure. Claims about unseen healing forces abound, and searching the internet will produce many a diagram that, like a horoscope, reveals the properties of each stone. (This book, in which crystals are whos and not whats, I present as Exhibit A.) As yet science has produced no supporting evidence, yet many ancient cultures believed in the power of crystals, and they only seem to be rising in popularity these days.

Skeptics of the powers of crystals point jubilantly to a study done in 2001 led by Dr. Christopher French at Goldsmith’s College in London, where 80 volunteers were given a crystal to hold while meditating. Participants reported such salutary effects as more balanced emotions, increased energy levels, relaxation of the forehead, and improved sense of wellbeing. And in fact, only six of the eighty volunteers failed to experience some element of altered state. Yet to the delight of the skeptics, instead of a real crystal, half of the volunteers were unknowingly holding a plastic fake. “Placebo effect!” the doubters proclaim with conviction.

Yet increasingly the evidence for placebo effects is real and compelling. (If you’re interested in this, Jo Marchant’s The Cure and Ellen Langer’s Counter-Clockwise are both excellent, up-to-date resources on the subject.) What intrigues me here is that with crystals, it’s highly possible that the placebo effect is as much a demonstration of the power of aesthetics as it is of the power of thought. The plastic crystal evidently looked and felt real to the participants of the London study. Perhaps it looked colorful and felt energizing, or perhaps it felt silky and looked soothing: to the people who believe only in chemical reactions, those sensorial qualities are inconsequential. But we know that the color of a pill can influence the drug’s efficacy (blue pills, for example, a color often associated with calm, correlate to sleeping pills and relaxants) — even in conventional medicine, aesthetics matter. 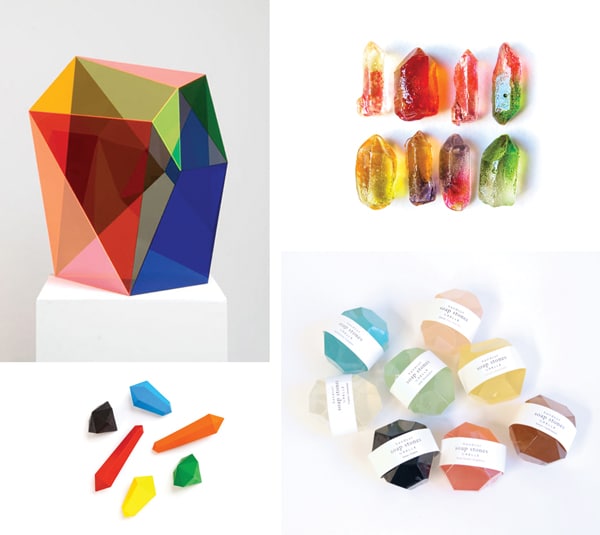 What if the source of crystals’ purported healing power is really aesthetic, rather than vibrational? I don’t have any data to suggest it is, but certainly it’s worth exploring. Color and translucency are rare attributes in nature, rarer still in the non-living world. Crystals capture and scatter light like few things, save mirrors and water. In fact, crystals are the most orderly of inanimate objects. Their atoms form neat, symmetrical lattices. So perhaps their elegant formations, their color and gloss attract some primal part of us that is attuned to signs of life, perhaps even stoking our impressions that they are animate in some ineffable way. Because what else in nature is that vibrant and yet not alive?

So while I tend to live my life in the land of the empirically verifiable, I also appreciate that some mystery keeps us humble, curious, on our toes. Crystal healing might be tinged with pseudoscience, but crystals themselves are just beautiful rocks, which seems as pleasant as anything else to surround yourself with, whatever their effects.

Just after new year’s, A. and I went to a retreat called Lumeria in the Maui upcountry. All around the garden, giant crystals had been placed among the bromeliads and agaves. I fell madly in love with an enormous amethyst set on a cement podium at the entrance to the lodge. It was the kind of irrational feeling where I caught myself, guiltily, in the middle of a daydream about how I might possibly smuggle such a thing in my suitcase. I didn’t exactly feel vibrations, but I liked its vibe.

{aesthetic of joy} is an ongoing series that examines different aesthetic elements and explores why they bring us joy. To see previous posts in the series, click here.