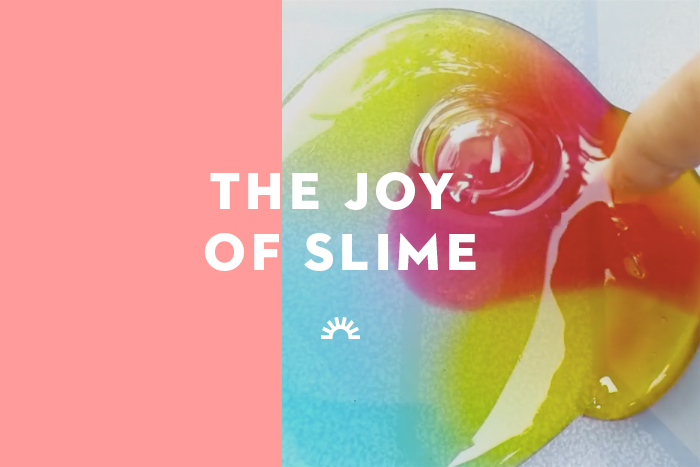 “Have you seen the slime thing?”

We are on FaceTime, A. and I, him in New York and me in Paris. I wonder if this is a B-horror movie kind of thing or maybe an avant-garde art installation he’s talking about. But no, it’s just the latest Instagram phenomenon. “The slime thing” he’s referring to consists of videos, many made by teen girls in Thailand, of hands squishing blobs of colorful translucent slime, often with small colorful pellets or glitter mixed in. A. sent me one video via Instagram, and down the rabbit hole I went, squishing all the way down.

If these haven’t crossed your path yet, here are a few videos to get you started…

Stretch and poke I have a confetti slime obsession 🙊 Leave requests for slime videos down below 💖 PLEASE READ BIO AND RULES BEFORE BUYING STORENVY ONLY (for now 😝) PLEASE DO NOT PROMOTE YOURSELF IN THE COMMENTS OR PROMOTE ANYTHING OR I WILL DELETE THE COMMENT AND POSSIBLY BLOCK!💢 HATE IS BLOCKED ❌ NOT RESPONDING TO DMS (😩 sorry) YOU CAN PURCHASE ON MY STORENVY (in bio) #slime #slimeusa #slimeamerica #slimethailand #sweetdeco #sweetdecousa #sweetdecoamerica #sweetdecothailand #asmr Slime soothes many people and when people are stressed and have anxiety, they come to this account because it has asmr that people really love to hear that are very satisfying to them :)

translucent red jumbo apple❤️🍎 one of my first clear slimes first fruit slime ! had it forever READ BIO AND RULES BEFORE CONSIDERING BUYING STORENVY ONLY PLEASE DO NOT PROMOTE YOURSELF IN THE COMMENTS OR PROMOTE ANYTHING OR I WILL DELETE THE COMMENT AND POSSIBLY BLOCK! HATE IS BLOCKED NOT RESPONDING TO DMS YOU CAN PURCHASE ON MY STORENVY (in bio) #slime #slimeusa #slimeamerica #slimethailand #sweetdeco #sweetdecousa #sweetdecoamerica #sweetdecothailand #asmr Slime soothes many people and when people are stressed and have anxiety, they come to this account because it has asmr that people really love to hear that are very satisfying to them :)

Another cotton candy slime💅🏼🍡🍭💦⚡️ except this time I went crazy with the colors 😁 enjoy! #sparklygoo #art #slime #satisfying #slimecanada

Feeling a little tingly all over? That may be an autonomous sensory meridian response (or ASMR, for short) you’re having. ASMR is a kind of euphoric static-like sensation that usually begins on the scalp before moving down the spine and along the extremities. It’s described by people who experience it as intensely pleasurable and relaxing in a sensual but not sexual way. Common triggers of ASMRs include softly whispering voices, crinkling of paper, or a repetitive scratching of a surface. The phenomenon was surfaced in 2007 and since then, groups of people who are particular susceptible to ASMR share videos and experiences across the internets. (If ASMR is new to you, this reddit thread will give you a window into the robust ASMR culture and the content that thrives within it.)

Slime videos seem to be the newest attraction within the ASMR community, but you don’t need to feel ASMRs to appreciate the joy of slime. I think the appeal of slime stems from something that is far more universal — essentially, that so much time spent with devices has left us ravenous for tactile experiences. Think: what was the most wonderful thing you touched today? How far do you have to go back to recall something on your fingertips that felt truly joyful? Most days, our hands curve around metal and cement, our fingertips tap against plastic and glass. Our fingertips have a perceptual acuity of 10 nanometers, optimized for discerning gradations of curvature and texture our eyes can’t even see, and yet in the manmade world, most of what they get to feel is slick and boring. Slime videos offer a vicarious hit of tactile stimulation.The biggest feature of slime videos is people poking at the slime, making little divots in the surface before picking it up to squish it. Not as good as squishing the slime yourself, but better than nothing.

Slime is visually appealing, too: the combo of glossy, stretchy goo with colorful or sparkly “mix-ins.” It’s like Flubber meets the Bedazzler. Once I got into slime, I realized that there are a variety of different types: confetti slime, cotton candy slime, fluffy slime, bubblegum slime. Some look like frosting piped out over a cupcake, others like gummy candy. The slime aesthetic is one of sweetness and light — literally. Slimes are often made to look like sweet things from the world of confectionary or baking, and they are made in bright, light pastel colors, sometimes translucent to allow the light to come through. These are things with visceral, timeless appeal, so it’s not surprising we find ourselves drawn to them.

Maybe most significantly, “the slime thing” feels safe and innocent, a harmless detour into a world of squishy, rainbowy, glittery goodness. And given the state of the world and this election, maybe this is exactly the kind of escape we need right now!

Image above snapped from the delightfully slimy feed of @species_shop. For more slime, check out these instagram accounts: @rad.slime, @slimey.sugar, and @peachyslimebakery. Or watch this video to learn how to make your own!